The second question I am asked is how such a course can be offered at Southern Methodist University, the then-future (now current) home of the George W. Bush Presidential Library. In fact, administrative impediments to the offering of my course in the far left-wing Meadows School of the Arts were non-existent.  When I first taught the  lass, my Chair was an internationally-known queer theorist, and my Dean was an experimental jazz pianist and composer. The only administrative hurdle we needed to jump was my presentation of the syllabus to the Women's and Gender Studies working committee in order to offer the course as an elective for the WGST minor and thus recruit some of their excellent interdisciplinary students to enroll in the course.  Any concerns the working committee might express would be a crucial expression of their right under basic faculty self-governance to decline to include the class as an elective in their minor.  At no point did anyone challenge my academic freedom to offer the course in our Film and Media Arts Division in Meadows.

I was fortunate to have the unqualified support of the  director of the Women's and Gender Studies program, but the two-hour meeting with the WGST committee was tremendously challenging, with questions posed such as, "'These films are designed to sexually arouse the viewer. Don't you think this will create a hostile learning environment for any class discussion that follows?”  In response, I suggested that we investigate or deconstruct the assumption that arousal is a hostile psychic state.  A principled and indefatigable activist asked, “I work with at-risk teenage girls in the inner city. Do you think I am just supposed to tell them to embrace prostitution as empowering?"  I replied, “No.”  Of particular concern was the fact that we were actually going to watch pornography in class without "framing" it properly, something I initially feared meant presenting the most shocking images out of context alongside police photos and statistics about sexual violence in the manner of the old Women Against Pornography slide shows. The screening of 13 films in class seemed like a kind of overkill to one member who saw it as "an inadvertent re-objectification of women’s bodies, as Sarah Baartman was re-objectified when twentieth-century academics came to study her being put on display.”

Someone suggested that to mitigate this conception, a guest speaker involved with the rights of sex workers might be invited to counter the emphasis on guest appearances by pornography producers and performers (the only guest speaker I was able to bring to the class was Bay Area queer porn director and performer Courtney Trouble, who very graciously spent two hours on Skype answering students’ questions on a wide range of topics).  The possibility that many of the most informed, passionate. and articulate of such advocates might themselves be sex workers involved in some aspect of pornography did not seem to occur to this person. Another committee member confessed that they were not familiar with any of the films or books on the syllabus but was concerned that the course will "celebrate pornography and disregard the exploitation involved in its production and consumption--that the course will therefore represent sexuality as normatively exploitative rather than as an occasion for positive transformation and mutual respect."  This gave me a crucial opportunity to explain that the screenings and readings were carefully curated and sequenced to stimulate just such a discussion.  After similar give-and-take negotiations and tweaking of the syllabus, during which I discovered a huge generosity of spirit and commitment to freedom of inquiry among the members of the Committee, I was pleased to offer the course the  following  semester as part of the Women's and Gender Studies minor. 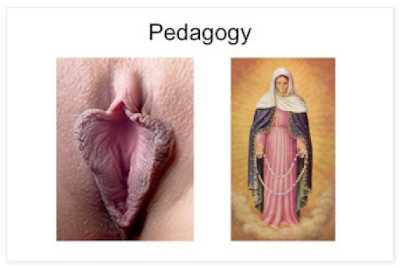 The course's ultimate title, "Feminism and the Pornographic Moving Image," was an effort to demarcate and make manageable the dizzying diversity and complexity of the subject at hand.  After attempting to respond with integrity and an open mind to the concerns of fellow feminist colleagues on the faculty who have spent decades fighting the good fight against forces a tall white dude with a beard and a PhD can scarcely imagine, much less comprehend, I was turned loose in the classroom to take this fight to the students.

Suddenly, I became aware that a number of students were as shocked and offended by the feminism on display as they were by the pornographic moving images. Male university athletes who sat courteously and quietly through Wakefield Poole's 1972 gay hardcore classic Bijou (which I screened on the first day of class) called me out passionately and repeatedly when I presented ideas underlying Betty Dodson's Bodysex Workshop and Annie Sprinkle's Sluts and Goddesses.


Almost without exception, the students responded to the course materials with maturity and a very high degree of intellectual integrity. I was troubled that there was one group of students, comprised of women and gay men, who sat in front and passionately participated in the discussion and was riveted by the screenings, and another, more diffuse and diverse group  who sat dispersed throughout the room, said little in class discussion, and could be occasionally observed texting and even Facebooking during the more challenging pans of some of the screenings. I grew immeasurably as a teacher and a scholar from my interaction with each of these groups. 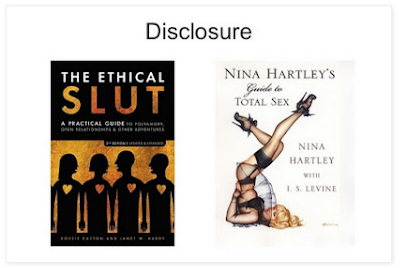 The first group, which was comprised of several of our very best majors in the Film department and stellar interdisciplinary majors from Women 's and Gender studies, engaged with both the readings and the screenings in a surprisingly open and even self-revealing manner. These students would speak frankly of their own experiences as sexual beings and members of groups which had experienced the marginalization and contempt some of the films exemplified, and ethers critiqued. When we read Janet Hardy and Dossie Easton's guide to polyamory, The Ethical Slut, in conjunction with a screening of John Cameron Mitchell's sexually explicit 2006 feature Shortbus, l was prepared for a shit storm against which the Virgin Mother's labia would pale in comparison. This never happened. In fact, both the group in front and the group dispersed throughout the room found the book to have been a revelation, and I could see the light go on as many students made the connection between the collectively yearned-for celebratory transformative power of sexual variety and the often-pitiful and clumsy parody of this ideal which animates much conventional moving-image porn. In a discussion that was an answer to the WGST committee member's question about normative respect and exploitation which unfolded in real time, a couple of people said things like, "Well, obviously I 'd never do something like this [referring to The Ethical Slut], but now I see why some people do."  One female student read aloud a passage and said, 'This is a description of a wonderful relationship, open or not. We could all learn from this book." Then, in a moment for which dozens of committee meetings could never have prepared me, my best student asked  straight out, "So, do you and your wife have an open relationship?"  Before I could think, I heard my voice saying, "Well, I'm sure some people would find us pretty boring, but we try to integrate our intellectual and political commitment to sexual openness and diversity into our shared  lives when it's appropriate." Thanks to Christopher Ryan, co-author of Sex at Dawn, for this most helpful of get out of jail free cards. 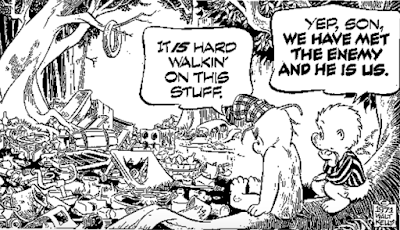 It was the second of these groups, comprised of less academically-accomplished or politically adventurous students and those whose time was massively overbooked by work or sports, overwhelming heterosexual and male, from whom I learned and grew the most as a teacher, scholar and person. The backwards baseball cap-wearing male college student, famous to all through cultural forms such as articles in The Onion and countless lower-end Hollywood comedies, would be a natural comic foil to the other characters in our story, the bumbling, licentious professor and the stern, Second Wave feminist scolds on the Women and Gender Studies committee. But these were the students who were most consistently operating outside of their comfort zone, yet they intrepidly soldiered on. In my desire to be a card-carrying militant and stick it to the man, I front loaded the course with material I had calculated to shock and offend them, from the initial class meeting where we watched (the admittedly beautiful but to them quite alienating) Bijou. Where I had worked to keep an open mind about the misgivings my colleagues in Women's and Gender Studies had about the focus and materials of my course. and while I had been careful to frame material likely to be disturbing to the female students in the course with care and subtlety, I realized much later that I had callously dismissed the discomfort of many of the conservative cisgender heterosexual males and had responded to several of them withdrawing from the course with relief, even glee. After fifteen weeks of seeing the integrity and resilience of these students in the face of my deliberate onslaught, I came to realize that the repressed, licentious professor in this story had reappeared with a vengeance, projecting onto a number of his fellow cisgender males everything that he was deeply afraid that he remained, that he so passionately yearned to disavow, and for which he deserved public humiliation and punishment.